HONG KONG and DA NANG, Vietnam, Nov. 24, 2021 /PRNewswire/ — Benefitting from the influx of investment from numerous multinational companies shifting their manufacturing bases to Vietnam in attempt of diversifying their production, Vietnam’s economy has recorded an impressive growth despite the pandemic. Alongside the growing middleclass population, the inflow of foreign talents has stimulated the demand for quality residences in which the prices of such condos in Hanoi and Ho Chi Minh City have surged sharply, while Da Nang is expected to follow the trend with such a central strategic location. Asia Bankers Club, Golden Emperor and Ashton Hawks are the appointed official agents for foreign quota sales in cooperation with the esteemed Vietnam developer Filmore, exclusively promoting The Filmore Da Nang, with prices starting from HK$2,200,000. 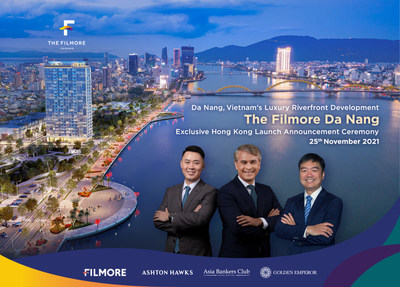 Vietnam’s GDP is expected to rebound next year

Due to the pandemic, economies around the globe have slowed down considerably while Vietnam is still having a positive growth. According to UOB’s 2021 Quarter 3 Economic Outlook Report on Vietnam, Vietnam is still able to have an annual GDP growth of 3% due to the government’s quick decision to gradually lift their pandemic restrictions from early October, as well as their efforts in promoting vaccination. It is predicted that when the majority of their economic activities resume under the new normal, their GDP shall bounce up to 7.4%.

Located in Vietnam’s central strategic area and being one of the four largest cities, Da Nang has attracted the attention of multinational companies and investors. Da Nang serves as the transportation hub between the South and North sides of Vietnam through land, sea and air transport – you may reach Hanoi and Ho chi Minh City, the two financial centres, in about 70 minutes and Hong Kong in about 2 hours by air, all thanks to its’ prime seaside location and developed infrastructure.

A diversified economy signifies a strong potential, and that is exactly what Da Nang offers with its developed tourism, manufacturing and shipping industries. Mr. Danny Nguyen, Chairman of Filmore, said, «With Da Nang’s 3 main industries acting as the economic driver, it increases our GDP per capita and strengthening the middleclass population. The influx of foreign investment in setting up production bases here, notably LG and Fujikin, has increased the number of expats that stimulated the demand for quality residences.»

Despite how the tourism industries are affected globally, Da Nang has taken the initiative in drafting a plan to revive the industry. The first phase started in mid-October to resume domestic travels, and reopened its borders to businesspeople and Vietnamese compatriots in November for the purpose of visiting relatives, with an emphasis on the Korean and Russian markets. The third phase shall begin after Vietnam has recovered domestically under the new normal.

As part of the government’s reforming efforts in turning Da Nang into Vietnam’s central financial centre, it has been working towards to actualise a «Masterplan of Da Nang City to 2030 with A Vision to 2045″. The plan places heavy emphasis on developments of their tourism, manufacturing, trading and financial industries. It’s been predicted that Da Nang’s GDP shall have a yearly increase of 9% – 10%, forming a GDP per capita of $5,000 to $5,500.

Mr. Kingston Lai, CEO of Asia Bankers Club, Golden Emperor and Ashton Hawks, said, «There will be a lot of major infrastructural developments coming up in Da Nang, namely the $2 billion-worth proposed railway that links up Da Nang and Hoi An, which shall further consolidate Da Nang’s important position as a central transportation hub, attracting more tourists and foreign investment. According to the People’s Committee of Da Nang City, many investors have already been eyeing up on Da Nang’s potential and it has authorised 30 FDI projects just this year that accounts for over $44.04 million. These projects are mainly in the tertiary, tourism and high-tech industries, and we can foresee that Da Nang’s future development will be comparable to Hanoi and Ho Chi Minh City.»

Skyrocketing home prices with Da Nang being the next in line

Da Nang’s prospects are looking optimistic with its potentials in economic development and surging demand for quality homes. Mr. Ivan Yam, Managing Director & Partner of Golden Emperor, adds, «The property market of Vietnam is rather stable like Hong Kong despite the pandemic, with potentials to record a positive growth. The home prices of the two mainstream cities, Hanoi and Ho Chi Minh City, have been skyrocketing with the aggressive starting prices from developers. Take Ho Chi Minh City as an example, even though the per square feet prices of new luxurious condos have already reached HK$10,000 in District 1 and 2 CBD areas, they still get sold out expeditiously. While our project locates in the prestigious area by Han River, its price is still only half of what Hanoi and Ho Chi Minh City ask for, prices start from HK$2,200,000. Judging from the basic starting price in Ho Chi Minh City, it is obvious that the there is an ample room for the property market of Da Nang to grow, and it would be the perfect timing to enter the market now.»

Brought to you by the acclaimed Vietnamese developer Filmore, The Filmore Da Nang has its fair share of appealing aspects and potentials. Mr. Frederick Ho, Director & Partner of Ashton Hawks comments, «The Filmore Da Nang is one of the few projects in Da Nang that issues Pink Book to foreigners. It locates at the prime location within the CBD by Han River, where you may enjoy the panoramic views of the river and the city. You may reach business and shopping areas, greeneries and reputable schools in just a few minutes; Da Nang International Airport in 8 minutes and major science parks in 30 minutes which make it a perfect choice for middleclass families and professionals alike. For a laidback lifestyle, you may reach Sun World Asia Park and My Khe Beach in around 5 minutes. While Da Nang is also a famous spot for golfing, The Filmore Da Nang is indeed an ideal choice for investing in, or serves as a holiday home with an estimated rental yield of 6% p.a.*.»

The Filmore Da Nang will be introduced exclusively by Asia Bankers Club, Golden Emperor and Ashton Hawks in Hong Kong. A seminar on investing in Da Nang will be held on 4th– 5th Dec, 2021, at Salon 5-6, 3/F, JW Marriott Hotel Hong Kong. There are 25 stories and 206 units in total, with 61 limited foreign quotas. The sizes of condos range from 484 to 1,259 sq. ft., available in multiple options such as 1 BR, 2 BR, Dual-key condos, Sky Terrace, and 3BR loft. The condos are fully fitted and furnished, there will be a swimming pool, gymnasium and multi-purpose function rooms available to its residents. The estimated completion date is April in 2023.

Filmore is a fast-emerging developer focusing on the high-touch niche, considered to be a «new star» in Vietnam’s real estate market with sustainable growth, even during 2 tough years of COVID-19.

As a descendant of Phat Dat Group – currently one of the biggest names in Vietnam’s real estate market with a capitalization of over 2 billion USD, Filmore has a very good starting point in terms of business competency with a solid foundation, market insight, and strategic partnerships worldwide.

Founded and operated by people who have strong experience in the industry and dream big to create new values for the market, customers, and residents, Filmore aims to create excellent products regarding residential and commercial categories.

The Asia Bankers Club is an investment club for banking and finance professionals in Asia. With a vast member base, the Asia Bankers Club organizes events for its members and provides physical assets for investments, such as properties, fine wines, art, timepieces, and collectables. Our members are from top tier investment, private and consumer banks, asset management companies, private equity firms, hedge funds, and sovereign wealth funds primarily located in key financial centres.

Golden Emperor Properties Limited is a Hong Kong-based company that offers international properties to clients in Hong Kong and globally. The company works with property developers from Thailand, Vietnam, Japan, Malaysia, the United Kingdom, the USA, Australia, Europe, and many others. The company has a team of dedicated sales agents that can provide consultancy and information on relevant transaction-related topics such as taxation, sales & purchase procedures, payment schedules, and many others.

Ashton Hawks was established by a group of renowned investment gurus and private collectors who laid the very foundation of the discerning Ashton Hawks, balancing luxury leisure lifestyle and investment. Our headquarter office is located in Hong Kong, with overseas branches in Bangkok and Vietnam. Ashton Hawks’ real estate portfolio is as diverse in style as it is in mega-estate location across the globe, and caters to luxury lifestyles of all kinds. Ashton Hawks takes pride in being a boutique yet original real estate consultant in the luxury market segment for the ultra-affluent.

Nissan unveils Ambition 2030 vision to empower mobility and beyond