Both Jack and Riley are favored to win their bouts, but after the highly viewed press conference in Los Angeles, their opponents aren’t buying into the odds. Jack, a Mayweather Promotions star and former Super Middleweight and Light Heavyweight World Champion is slated to fight undefeated Blake McKernan in a featured 8 round bout. «There are levels to this,» Jack stated. «I took this fight to help promote my charity the Badou Jack Foundation, where all of my proceeds will be donated to. Our mission is to give children across the globe a fighting chance in life.»

Both Jack and Riley are managed by Amer Abdallah, a former world champion turned Manager/Advisor to many notable fighters. «It was a tremendous honor to receive a call from Mike Tyson’s team and offer this opportunity. I’m looking forward to having Badou use this stage to promote his charity and continue to give children across the globe a fighting chance in life. The icing on the cake is having the SmartStop team join us on this journey,» Abdallah stated.

Recently, Mike Tyson posted on his Instagram page thanking SmartStop for their support of Jack & Riley. «I want to thank my friends at SmartStop for sponsoring Badou Jack & Viddal Riley on the undercard of my fight on November 28th vs Roy Jones Jr.,» Tyson stated.

The Tyson vs Jones event will stream on Triller PPV from the Staples Center in Los Angeles, CA on November 28th. 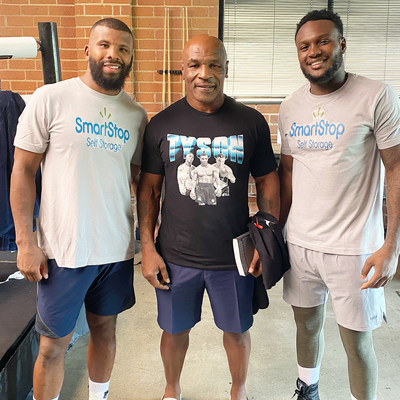 Elite Alliance Partners With the Residences at Rancho La Puerta