WASHINGTON, Nov. 11, 2021 /PRNewswire/ — The president of Honduras, Juan Orlando Hernández, presented a book that compiles the achievements of his Administracion, and he took the opportunity to express his gratitude to the international community for their support to the Central American country. 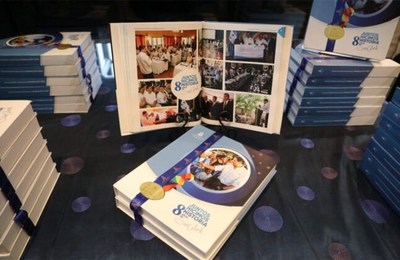 The Report, presented by Hernández at a ceremony in Washington DC, is entitled «Together we made History, 8 years of Juan Orlando» and it details the main results of his two periods in office since January 27, 2014.

«For 8 years we had to fight against those who oppose everything, but they did nothing when they had the opportunity to do so.  And in the final stretch of our mandate, when we began to reap the fruits of an orderly and transparent management, the pandemic and the hurricanes Eta and Iota struck us» stated the president. «But today we leave a transformed, new and better Honduras,» he said.

In terms of the economy «we have maintained low levels of inflation with a stable exchange rate. For five years we have maintained good credit rating according to agencies such as Moodys, Standard & Poor’s and the IMF» the president continued.

Hernández stressed that Honduras, against all odds, will grow more than 8% this year and acknowledged that this is possible due to the «effort we all have done.»

He highlighted the achievements of his Government in the agro-food sector.  During his Administration, 452 crop water reservoirs were built to increase agricultural production and 1.7 million hectares of forests were protected from pests.

The Hernández administration strengthened the tourism industry, on which more than 274,000 families depend nationwide.

«One of the sectors with the greatest boost has been tourism.  Before the pandemic, we had reached peaks of income up to 800 million dollars, generating more than 274,000 jobs, thanks to the fact that our country has enormous potential yet to be exploited,» Hernández pointed out.

The president added that his government bet on international tourism and «now we receive the largest cruise ships in the world, we have greater air connectivity with Europe, the United States and other countries in the world.»

Honduras as «Logistics Center of America»

«Our administration has managed to build the largest infrastructure when compared to any previous government. We are achieving the dream of 200 years, to unite the Pacific and the Atlantic with the interoceanic highway from Puerto Cortés to Amapala, as well as all the productive regions of the country», he assured.

«Honduras has a clear roadmap to become the Logistics Center of America and all the infrastructure of new road corridors, modern logistics ports and airports, such as the newest Palmerola international airport, which is at the disposal of Central America to do excellent business,» said Hernández.

Hernández is taking the last months of his administration to thank the people and governments that support the developing programs in Honduras, which have been key to promoting and strengthening the institutional framework in matters of transparency and anti-corruption, strengthening the fight against drug trafficking, transnational crime, and respond to health and climate emergencies, among other fundamental aspects of his Administration.

«In these eight years, we can truly say that together we made history to leave behind a better Honduras and a better ally for the region, for our neighboring countries and the Western Hemisphere» he said.

Today I want to send a message of deep gratitude to friendly governments and especially to their citizens, who have placed in us the confidence that we can move forward despite the vicissitudes that affect our Central American region, Hernández concluded.