DUBAI, UAE, Nov. 15, 2021 /PRNewswire/ — His Highness Sheikh Mohammed bin Rashid Al Maktoum, Vice President and Prime Minister of the UAE and Ruler of Dubai, and His Excellency Iván Duque Márquez, President of the Republic of Colombia, witnessed the launch of the strategic partnership between the UAE and Colombia in the field of government modernization, which aims to enhance government performance and achieve sustainable development in the government work ecosystem. 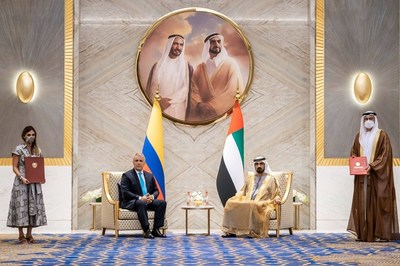 Mohammad Abdullah Al Gergawi, Minister of Cabinet Affairs, and Maria Paula Correa Fernandez, Chief of Cabinet of the Presidency of the Republic of Colombia, signed the memorandum of understanding (MoU) on strategic partnership in the field of government modernization. The MoU crowns a series of meetings, joint discussions, and mutual visits between the governments of the UAE and Colombia.

The «Government Experience Exchange Programme», launched by the UAE government under the supervision of the Ministry of Cabinet Affairs, aims to promote global partnerships and share knowledge, experiences and successful government work systems, in addition to presenting the exceptional experiences developed in the UAE in the field of government management to the world.