LONDON, Nov. 17, 2021 /PRNewswire/ — A ground-breaking new development has been announced on the West Coast of Mexico at Xala. The project, which will see three boutique hotel brands, one hostel, and more than 75 new homes, brings together a unique destination for socially conscious travellers integrated with stunning raw nature and a thriving Mexican community. 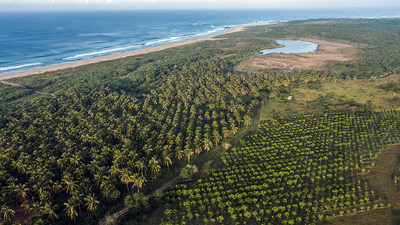 Ricardo Santa Cruz, Jeronimo and Juan Bremer, developers of Mandarina, the lowest-density high-end project to ever be created in Mexico, have announced the launch of their latest venture. Xala, which has been 15 years in the making, is scheduled to welcome travellers in 2023 and is creating a thriving community dedicated to agriculture, farming, an array of cultural activities and innovative sustainable practices.

With more than 1,000 hectares of land hidden on Mexico’s Pacific Coast, visitors and locals will enjoy the ruggedly beautiful Costalegre region, including eight kilometres of long sandy beaches and two Ramsar estuaries.

Xala is based on a deep respect for the existing communities, environment and all-natural elements. It seeks to restore and protect the flora and fauna in the region, reforesting nearly 250 hectares of land and creating a private protected natural area of more than 500 hectares, while generating programs for the protection of reptiles, ocelots, and turtles. Xala is leading in the recovery and restoration of the Chalacatepec and Xola-Paraman estuaries which are wetlands protected under the Ramsar agreement due to the significant role they play for migratory birds.

The project has been backed by American actor and producer, Richard Gere, whose humanitarian work and beliefs sublimely fit with the mission and goals of Xala, making him one of the many great partners on the project. Also amongst the strategic partners is former Element Skateboarding CEO and The Heart Supply founder Johnny Schillereff, who will be launching The Heart Supply’s first skatepark at Xala, placing skateboarding and its philosophy of social inclusion as an integral part of a sustainable vision for the future.

Ricardo Santa Cruz, Founding Partner of Xala said: «When I first laid eyes on Xala, it was one of the most beautiful places I’d ever seen. Before then, I wasn’t ready to be involved in another project, but I knew Xala was going to be truly special.

«Everyone involved in the project is part of a family, that is committed to the same goals. We all have a social responsibility, not only to the environment but to the planet and the community living here too. We want to create something that is going to positively contribute to the future generations, and stand the test of time.

«Xala is not a resort, it is a living community of people and when travellers come here, it will feel very different to anything they’ve ever experienced before.»

Richard Gere, Strategic Partner of Xala said: «The opportunity to be part of Xala was something I knew I couldn’t miss. Xala will be a project that flourishes and sets a new benchmark from which sustainable, respectful and community-based developments should be based on. I’m excited to work with the team and the community to bring our shared vision of delivering the most exceptional levels of tourism and a truly sustainable neighbourhood to this incredibly special part of the world.»

Xala is approximately a two hour/105km drive from Puerto Vallarta International Airport and five minutes from the planned Costalegre Airport. The Federal Highway 200 is also being modernised to allow commuting between Chalacatepec and Puerto Vallarta international airports to take less than an hour, making the destination more accessible to travellers and locals alike. Xala will offer more than 75 rancho estates and 50 homes in the heart of the town as well as three boutique hotels and one hostel full of character and charm for travellers to reside in, create new memories, experience an enriched lifestyle, and enjoy all that Xala has to offer.

The initial 125-million-dollar first phase investment is set to welcome homeowners and travellers to Xala in early 2023.

ABOUT XALA
Xala is being built from scratch as a vision of living for the future. The full first phase of the project is planned to open in 2023 and will encompass a community, working hacienda, small town, learning centre, soccer team, skateboarding, collection of private beachside villas, boutique hotels, turtle sanctuary, lighthouse, town square, mango fields, a community changing ‘Gran Vision’ water project, beautiful wildlife habitats and much more.

ABOUT RICARDO SANTA CRUZ
Ricardo Santa Cruz, is the President and CEO of RSC and currently serves as Head of the Xala Development. He has more than two decades of experience as an entrepreneur, real estate developer, innovator, investor and business leader in Mexico. He was one of the founding partners of the successful Mandarina Development, which won development of the year for 2020 for Latin America. Today, he is focused on the soon-to-open Xala development.