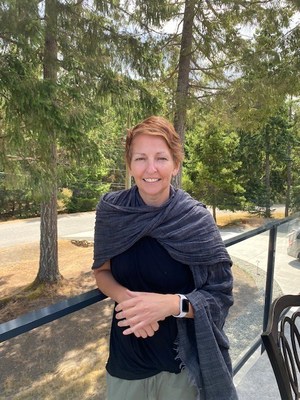 «I am excited to be part of this new Foundation that is breaking new ground in self-determination,» said Dr. Hobenshield. «I really believe in Indigenous community-led organization and change. It’s the direction First Nations are going and an opportunity for the country to show their support to create a better future for our children and our Nations. I look forward to leading with the values handed down to me by my Gitxsan grandfather who always told me ‘To be good is to do good’.»

Ms. Hobenshield has worked with the Coast Salish communities on Vancouver Island for more than 25 years, most recently as Director of Indigenous Education and Engagement at Vancouver Island University.

«We welcome Sharon’s leadership as we move forward toward investing in the futures of our children and communities.  The Kw’umut Lelum Foundation is a response to the call for Indigenous self-determination and independence from government funding. It will open new opportunities for education and well-being for our people,» says John Elliot, Thỏlmen, Chair of the Kw’umut Lelum Foundation. «Sharon’s history of collaboration and partnership with our Coast Salish Nations, and her dedication to Indigenous education and success made her a clear choice to guide the Foundation.»

The Kw’umut Lelum Foundation is one of the first of its kind in Canada – a wholly First Nation-owned and led organization whose purpose is to collaborate with private and public philanthropists to invest in Indigenous youth and communities, ensuring equity of access to support programs, positive outcomes in education, and increased community wellbeing.  It will build on the work of Kw’umut Lelum, whose 25 year history providing child and family services on Vancouver Island has resulted in decreased numbers of Indigenous children entering foster care and many more children remaining connected to their families and culture.  Kw’umut Lelum welcomes inquiries from individuals and organizations who are interested in investing in the community-based work of the new KL Foundation.

«Kw’umut Lelum has been providing culturally-informed supports and services to our member Nations for over 25 years, pushing against the colonial systems that saw our Indigenous children removed from their families and denied their culture,» says William Yoachim, Sqwulutsutun, Executive Director of Kw’umut Lelum. «We believe in working with our Nations to pursue new and innovative approaches to change. This new Foundation is another important step towards ensuring our children are provided the best possible opportunities in life, in a way that honours their Coast Salish culture.»

Sharon Hobenshield’s traditional name is Ha-Youly. She belongs to the Wilp Malii from the Gitxsan First Nation on her mother’s side and is of German ancestry on her father’s side. Sharon has 25 years’ experience working on Coast Salish Territory as a social worker and educator and has worked at Vancouver Island University in a leadership role since 2006 as the Director of Indigenous Education and Engagement. She believes strongly in Indigenous led and controlled programs and services to ensure authenticity of spirit and culture and to uphold the self-determining rights of Indigenous people.

Sharon has a Bachelor of Social Work, Master’s in Education and Doctorate in Educational Leadership and Policy. Her dissertation, Haq wil la hlo is sim: Walk Slowly on the Breath of your Ancestors, was an examination of gift-giving within Post-Secondary Education and inspired by her Grandfather’s teachings. Sharon is a proud mother of twin girls and makes her home in Nanoose Bay with her partner and mother.