ISTANBUL, Aug. 26, 2020 /PRNewswire/ — While increasing its domestic and national defence industry works, Turkey continues its naval investments with two Emergency Response and Diving Training Boats with a 71 percent localization rate, two new SAT (Underwater Dredging) boats, and eight high-speed patrol boats delivered to the Naval Forces Command at the New Naval Systems Delivery Ceremony held at Desan Shipyard. Leading the ceremony was President Recep Tayyip Erdogan, in his speech, addressed to all ship builders, he took the opportunity to congratulate Kaptanoglu, proud owners of Desan Shipyard, on 116 successful years in the shipping industry, President Erdogan explained, «We are together here with the owners of Turkey’s largest shipyards. I would like to say that let us build the second and third aircraft carriers after Anadolu.» 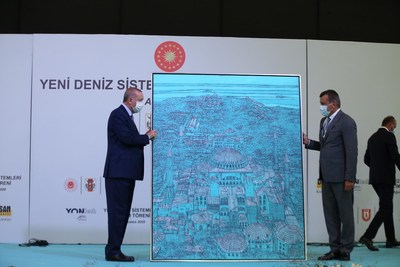 The Turkish Armed Forces, which has accelerated its nationalization efforts in the defense industry, continue its moves to increase its naval might at sea. In the ceremony led by President Recep Tayyip Erdoğan on 23 August at Kaptanoğlu Desan Shipyard, 2 Emergency Response and Diving Training Boats with a 71 percent localization rate, 2 new SAT (Underwater Dredging) Boats and 8 high-speed patrol boats were delivered to the Naval Forces Command. President Recep Tayyip Erdogan drew attention to the nationalization effort in the defence industry using the following words: «Turkey continues its path in a stable manner in the defense industry. The distance we have covered in the defense industry has contributed to many strategic successes we have achieved within and outside our borders recently. It is not possible for nations that cannot be strong and independent in the field of defense to look to their future with confidence. With the fulfilment of our national defense and security needs, technological independence has become more critical than ever in creating deterrence in the international arena.»

Underlining that the project stock in the defense industry has been increased from 62 to 700 and the project budget from 5.5 billion dollars to over 60 billion dollars, President Erdogan made a historic call for the building of aircraft carriers stating, «I would like to say that let’s build the second and third aircraft carriers after Anadolu. We need to move to the next level. Turkey is one of 10 countries in the world that can design and produce its own warships. Our Navy has further strengthened its stance, which gives confidence to the friend and fear to the foe.»

Drawing attention to the importance of the project for the Turkish defence industry, Cenk Kaptanoğlu, Chairman of the Executive Board of Desan stated, «We are proud and happy to successfully deliver these projects to Turkish Navy, our precious possession, which were launched by our President 18 years ago and today merely shining on the fate of almost all oppressed nations, not limited to Turkey, manufactured on behalf of the Turkish Defense Industry. Shafts and propellers of ships have been manufactured in a national project for the first time by us and have been classed by Turkish Lloyd. Acoustic monitoring, capture and diving systems, pressure chamber have been manufactured using the latest technology in Turkey. Data distribution systems and all electrical and electronic infrastructure have been created by our Turkish companies. This is the first project to be delivered at the first time with all the main system, port and sea trial. ‘This Proud is of All of Us, This Pride is of Turkey‘.»

FOR WHAT MISSIONS WILL THE BOATS BE USED?

Emergency Response and Diving Training Boats manufactured at Desan Shipyard, one of Turkey’s oldest shipyard that has completed many successful international projects, will support rescue diving and emergency response operations in future. The ships will take part in determining the locations of damaged, stranded, and sunken ships in the Black Sea, Mediterranean, Aegean and Marmara Seas. Emergency Response and Diving Training Boats will also be used in applied diving training of the diver personnel in the shallow and deep waters. 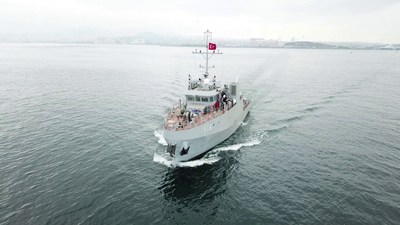