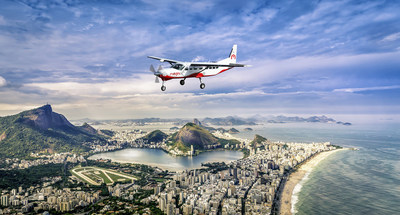 Flapper currently uses Caravan aircraft for its scheduled service in the state of São Paulo, as well as cargo flights across Latin America. By partnering with magniX, the company aims to decrease operating costs, reduce carbon emissions and activate new routes abandoned by regional aviation years ago. In the 1960s, Brazil had more than 260 airports connected by scheduled flights, compared to only roughly 110 today.

«We are excited to partner with a company considered the leader in the electric aviation industry,» said Paul Malicki, CEO of Flapper. «Together, we will work towards promoting clean and cost-effective aviation in Latin America, with safety as our top priority.»

The propulsion technology offered by magniX has shown a proven capacity to power a range of different aircraft, including the world’s most popular turbo-prop, the Cessna Grand Caravan. With high levels of reliability, unparalleled performance and operational practicality, magniX EPUs can work with multiple sources of energy, including batteries and fuel cells.

«Our agreement with Flapper paves the way for zero-emission passenger and cargo air transportation across Brazil and Latin America,» said Roei Ganzarski, CEO of magniX. «Through the electrification of the Caravan planes, we are not only providing cleaner transportation, but opening up access to airports no longer in use due to noise from traditional aircraft. Together, our companies are ushering in the new age of electric flight across one of the world’s most populated regions.»

As a part of the agreement, Flapper will assist magniX with planning, reviewing, and coordinating all aspects of certification processes, according to the requirements of the local civil aviation authorities. This includes jointly orchestrating the project, providing technical advice and conducting flight tests to show compliance.

The Future is Green

Flapper has built a proprietary aircraft sourcing inventory and mobile marketplace technology and today counts 270,000 mobile app users and 800 safety-vetted aircraft registered in its fleet. It actively works with numerous Part 135 and Part 121 air carriers on commercializing their fleets under the Flapper-branded passenger experience, which includes full charters and by-the-seat flights. The company aims to neutralize its carbon emissions by 2025, and is actively working with companies, such as magniX, to reduce its carbon footprint. Although business aviation is responsible for just over 0.6% of all CO2 emissions, it is considered strategic in terms of the future application of new technologies focused on reducing carbon footprints.

About Flapper
Launched in 2016, Flapper is the first on-demand private aviation company in Latin America. Headquartered in Belo Horizonte, Brazil, and with local offices in key cities in Latin America, the company commercialized scheduled flights in Brazil and boasts more than 800 safety-vetted charter aircraft on its regional marketplace platform. Flapper reports more than 270,000 users of its mobile app and is both ARGUS- and Wyvern-certified. www.flyflapper.com