WASHINGTON, Sept. 15, 2020 /PRNewswire/ — Born Free USA, a global leader in animal welfare and wildlife conservation, launched a new campaign, #TrapFreeTrails, which calls for an end to trapping in the National Wildlife Refuge System. 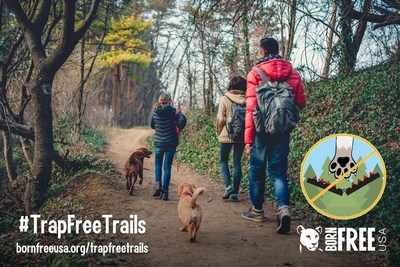 The National Wildlife Refuge System was established by President Theodore Roosevelt in 1903 and now encompasses 567 refuges, as well as 38 further wetlands management districts, which, together, comprise 95 million acres of land. Within the system, more than 296 threatened and endangered species are conserved across 356 of the individual refuges.

According to the U.S. Department of the Interior, the National Wildlife Refuge System was established «to conserve America’s wild animals and plants,» and to «provide enjoyment and beauty» to the millions of people who visit these lands each year. With more than 2,500 miles of land and water trails, these refuges are popular destinations for walkers, many of whom are accompanied by companion animals.

Yet, despite this mission, animal trapping is permitted on 216 (38%) of the refuges, a total of 11.1 million acres of public land. This means that, not only is this cruel practice allowed in areas of public land, funded by tax payers, but that companion animals are at risk when walking the trails.

Traps are indiscriminate and multiple accounts of companion animals, and even humans, falling victim to traps have been communicated to Born Free USA over the years. One such trapping victim is Maggie, a puppy who was caught in a leghold trap in Tennessee. Maggie was lucky to survive her ordeal, but had to have one of her legs amputated.

«By their very design, body-gripping traps are cruel, dangerous, and indiscriminate,» said Angela Grimes, CEO of Born Free USA. «Their brutality cannot be overstated. As our two undercover investigations have shown, traps inflict severe stress, pain, and suffering for any animal who steps into them – including endangered species and beloved pets.»

«‘Refuge’ should mean just that; that both animals and people are safe from harm while within their boundaries. Clearly, this is not currently the case and it is past time that this cruel practice comes to an end. Furthermore, the fact that this activity is carried out on public lands, whose maintenance relies on taxpayer dollars, adds insult to, literal, injury,» Grimes concluded.

Once in a trap, animals suffer in agony for hours or even days. In addition to the excruciating pain inflicted by the trap, trapped animals are also exposed to extreme stress, environmental elements, dehydration, starvation, and predation, with no chance of relief or escape.

Born Free USA has launched the #TrapFreeTrails campaign to raise awareness of this issue and to call for an end to trapping on public lands, including national wildlife refuges, national parks, and natural preserves.

You can support the #TrapFreeTrails campaign today by visiting bornfreeusa.org/trapfreetrails. There, you can sign Born Free USA’s petition to the U.S. Department of the Interior demanding an end to the use of traps on all public lands, download resources to keep pets safe from traps, read the stories of trapping victims like Maggie the puppy, and more.

About Born Free USA
Born Free USA works to ensure that all wild animals, whether living in captivity or in the wild, are treated with compassion and respect and are able to live their lives according to their needs. We oppose the exploitation of wild animals in captivity and campaign to keep them where they belong – in the wild. Born Free USA’s Primate Sanctuary is the largest in the United States and provides a permanent home for more than 450 primates rehomed from laboratories or rescued from zoos and private ownership.