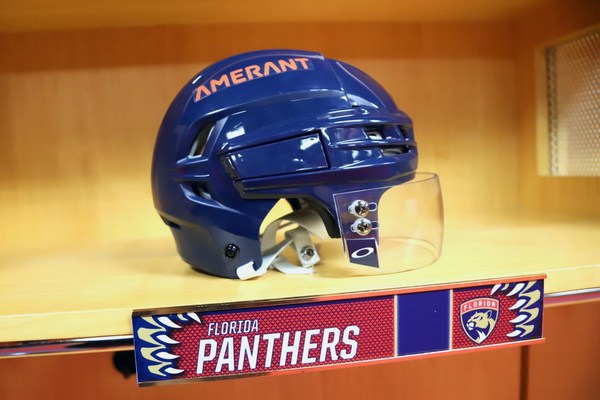 The Panther helmets with the Amerant branding will debut on Oct. 9 when the Panthers face the Tampa Bay Lightning at FLA Live Arena.

The partnership represents the latest initiative in Amerant’s growth strategy and expanded commitment to the South Florida community. Amerant branding will also be included on team-controlled merchandising, virtual on-ice logo positioning and other marketing activations in support of Amerant customers and fans throughout the region.

«We are delighted to partner with the Florida Panthers in what we believe will be an extremely exciting 2021-22 NHL season here in South Florida,» said Jerry Plush, Vice Chairman and CEO of Amerant. «We view this partnership with the Panthers as an integral part of Amerant’s new brand awareness strategy and look forward to furthering our relationship through this collaboration.»

«We are excited to announce this new partnership with Amerant Bank,» said Florida Panthers Chief Commercial Officer Shawn Thornton. «With their foothold in the local community, we see a great opportunity for crossover between our two organizations. With key placement on our home helmets, visibility and familiarity are just the beginning of what we can build together through activations.»

About Amerant Bancorp Inc. (NASDAQ: AMTB) (NASDAQ: AMTBB)
Amerant Bancorp Inc. is a bank holding company headquartered in Coral Gables, Florida since 1979. The Company operates through its main subsidiary, Amerant Bank, N.A. (the «Bank»), as well as its other subsidiaries: Amerant Investments, Inc., Elant Bank and Trust Ltd., and Amerant Mortgage, LLC. The Company provides individuals and businesses in the U.S., as well as select international clients, with deposit, credit and wealth management services. The Bank, which has operated for over 40 years, is the second largest community bank headquartered in Florida. The Bank operates 25 banking centers – 18 in South Florida and 7 in the Houston, Texas area. For more information, visit investor.amerantbank.com.

About The Florida Panthers
The Florida Panthers entered the National Hockey League in 1993, becoming one of the most successful first-year expansion teams in history. By just their third season, the Panthers reached the 1996 Stanley Cup Final in memorable fashion during their ‘Year of the Rat’ run as fans in South Florida littered the ice with rubber rats in celebration of goals and wins. In 1998, the Panthers moved to their current home in Sunrise, Fla., FLA Live Arena, where the club has won two division titles (2011-12 & 2015-16), hosted the NHL Draft twice (2001 & 2015) and the NHL All-Star Game in 2003. Led by owner Vincent J. Viola since Sept. 27, 2013, the organization has placed an emphasis on building a winning culture in South Florida and becoming stewards of its community. Under General Manager Bill Zito and Head Coach Joel Quenneville, the Panthers have grown into a fast, dynamic and exciting team boasting 2020-21 Frank J. Selke Trophy Recipient Aleksander Barkov, elite young playmakers Jonathan Huberdeau and Carter Verhaeghe, stalwart defensemen Aaron Ekblad and MacKenzie Weegar, two-time Vezina Trophy recipient Sergei Bobrovsky, and young group of top draft picks on the rise featuring forwards Owen Tippett, Grigori Denisenko and Anton Lundell, and goaltender Spencer Knight.

Jack in the Box Announces its Starting «Jackletes» Line-Up

Set A Successful And Fashionable Routine This Fall With Casio