HO CHI MINH CITY, Vietnam, Nov. 9, 2021 /PRNewswire/ — One of the biggest problems in the gaming world right now is player commitment to games. It is often quite difficult to keep a player base engaged in a game for years to come because of one fundamental problem: most players don’t want to spend all their resources to earn items, characters, and equipment that will one day disappear when the game’s server goes down. That is why NFTs have revolutionized the gaming world, enabling the Atlantis Metaverse project to thrive, where players will take on the role of demigods and truly own all the achievements in their conquests in this immersive and expansive mythological world. 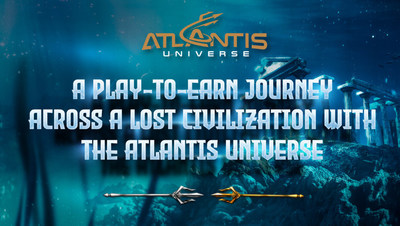 Step into a world of gods and monsters with Atlantis

In the Atlantis Metaverse, players will start a journey to explore, find resources, build squads, raid Bosses, breed demigods, produce weapons, items, equipment, and participate in tournaments. By taking advantage of the Non-Fungible Token (NFT) feature to create characters and items as well as Play-2-Earn elements, players will be able to earn a steady income through DeFi integration while still having fun with many gameplay features.

Atlantis is unlike many fantasy games out there because it takes advantage of the massive potential that the Metaverse concept brings to the table. In this game, players can experience a mix of the real world and the digital world. They can transform into a character and live a new life the way they want. And, in this case, they can assume the role of descendants of gods and monsters from Greek mythology.

The story of Atlantis begins when it ended 11,000 years ago. The greatest city the ancient Greek world had ever seen was sunk to the bottom of the sea. Today, players will pick among 7 playable races, all descendants of the old world’s legends, to rebuild this lost civilization.

The unique gameplay of the Atlantis Metaverse

To suit many different types of players, the gameplay is designed to cater to players from beginners to advanced, with many simple mini games for players to easily choose for their entertainment. At the same time, it also integrates fighting or tactical options for hardcore gamers.

The Atlantis Metaverse was created with a mission to build an open Metaverse. Atlantis is more than just a fantasy-themed strategy game with a deep setting and storyline. It also aims to become a decentralized society, where users are the builders of that society.

With the unique feature of NFTs, the game’s characters, items, and equipment can truly be owned outside of the game’s world. From the funds earned by these purchases, the team can further develop new features and items for the games, transferring them to players.

More than just a game, because Atlantis aims to build a society

To become the most colorful, rich, and diverse universe, the Atlantis Universe develops a platform to connect users with Artists, similar to Uber, but in the field of graphics. This platform allows users to choose graphics on the appearance and effects of any character at will. Those requests will be received and processed by Artists to create graphics according to the user’s wishes. All user assets will be guaranteed to be unique in appearance and effects.

Atlantis offers players a chance to live a second life as a creature of legends and myths. The big difference is that people don’t participate as a player, but they are the creator of that world. Thanks to technologies of the 4.0 revolution, such as AI, VR, AR, and Blockchain, Atlantis can become more than just a gaming experience, but also a portal that leads people into a journey of emotional, spatial, and valuable connections.

Join the community today at: https://t.me/atlantismetaverse